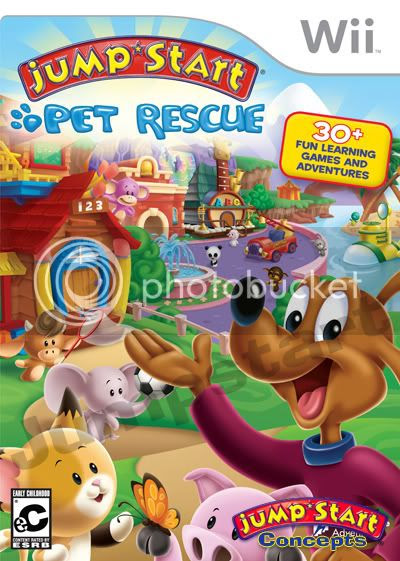 Knowledge Adventure sent me the JumpStart Pet Rescue Wii game to review. Our family does not have a Wii so we headed over to a friend's house for a little Wii playdate. As I mentioned in my review of the JumpStart website, the kid's favorite part of the game was making the "jumpee" animated character. With so many features to choose from they could stay there all day making different people. Most of the graphics and games are the same as the on-line version, so if you subscribe to the web site, you are getting pretty much the same thing with the Wii game. There were some cute song videos that I had not seen on-line. Another big draw is the pet stage, where you can make your pet perform tricks and routines (same as on-line). I'll sure there are many, many features that we didn't visit. The thing I love about JumpStart products is that you are always finding something new.

ESRB, the Entertainment Software Rating Board, has guidelines for information about games they have rated and they have rated Pet Rescue “Early Childhood”. This translates to ages 3 to 6. This is the first educational game on the Wii for this age range. The release date is September 1 to Walmart and September 2 to Best Buy, Sam's Club, Fry's and other retail outlets. The price will be $39.99.

Win One! Go HERE to win one of 25 copies. The contest ends on August 30 and right now there are very few entrees. Your chances of winning could be very good!
Posted by Sarah at 5:57 AM