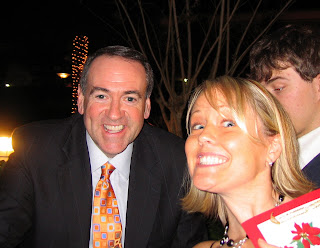 A friend of ours invited Mark and I to their school's Christmas Dinner (thanks t!!). They had Mike Huckabee as their speaker (I thought, WOW! How did they get him....but they rattled off some of their past speakers - Oliver North, Alan Keyes, etc. So I guess they can get some powerhouses). This is not a school I could afford to send my kids to!
This year's primaries were the first time I ever really cared about politics. I watched the first few debates and found out Huckabee was the guy for me. I really liked him and agreed with him about the majority of issues. I even sported a bumper sticker (yes, I did take it off once he was out of the race). Our friends knowing this, we were invited to this very elegant dinner. It was the second time I have been away from home since the baby was born. Both the baby and I did fine. We both only cried a little bit.
To open up the show Mike played his bass with some kids from the school. He's big into art/music education. Nice for someone to actually walk the walk. His speech was amazing. What a dynamic speaker. The first half was pretty much a stand up act, as he is such a funny storyteller and the second half, serious and oh, so truthful (preach it Brother Mike).
We all got signed copies of his newest book (I guess I can return my copy to the library before it's due date :). He wasn't doing a "photo opportunity" because he was on his way to the airport but I made my own. That's why it looks like I'm jumping into the photo. Reminds me of my college days, except no, despite my goofy smile and crazy eyes, I was not drinking.