I'm sure you are on the edge of your seat, waiting on an update on the Dark Chocolate Beet Cake.  I hope I didn't cause any sleepless night from you wondering what had become of it. 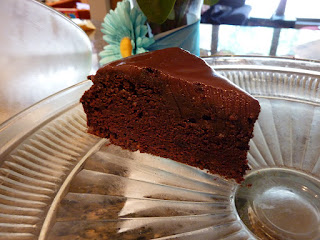 I made this cake last Saturday.  It is now Friday and there is one piece remaining (it normally wouldn't make it this long but it was Teacher Appreciation Week this week and I got a lot of tasty treats).  It has been in the refrigerator under a cake dome all week and it's STILL moist and delicious.  Just thought you should know.

I am headed into 6 weeks of craziness.  There is not going to be any time for baking, blogging, reading, or cleaning (I wish).  I am using this weekend to get ahead on anything that I can.  I made meal plans for the next few weeks and the beets in my refrigerator didn't quite fit in (nobody is a fan but me).  I couldn't let them go to waste and because I won't be baking any time soon, I thought I'd make a cake I pinned a while back.  Chocolate Beet Cake by VeggieBelly. 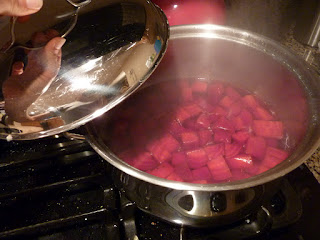 I'll let you go look at the recipe over at her place but here are a few of my pictures with some notes you might find helpful.  While cooking the beets the recipe said that the liquid should be gone after cooking but I had plenty of liquid left over. I drained it off and will add it to my morning smoothie.  It's the most beautiful red (sweet tasting, too). 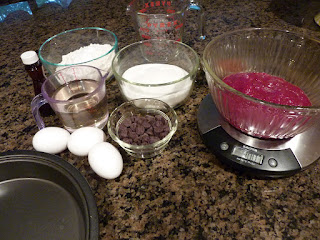 I love recipes where all the ingredients can be weighed.  It just easier that way and everything is ready to go.

Isn't the beat puree awesome??  The recipe said that it took about 3-4 large beets to get 300 grams.  I had 3 beets and it was more than double what the recipe called for.  I saved the extra puree to add to Scarlett's apple sauce.  I think she'll dig the red if I don't add too much to change the taste.  If she won't go for it I can add that to my smoothies too. 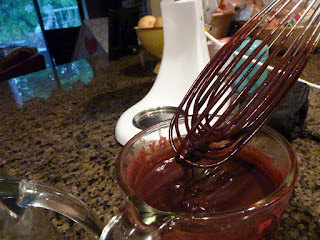 The recipe called for a 10 inch cake pan but I used a 9 inch.  The baking time was a little longer and I probably could have left it in another minute or two.  I would much rather have a moist cake than a dry one and I find there is a fine line there.  I think my cooking time was 38 minutes. 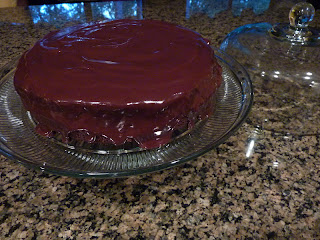 I love a good ganache.  I didn't have heavy cream and not even enough half and half.  I ended up using half and half and 2% milk and only making about half the amount of ganache in the original recipe.  There was still tons left over which I will most likely eat by the spoonful right out of the jar.

If I waited to top it until the cake was completely cool I would have used more but I couldn't do it.  I had it on the cooling rack about 5 minutes before frosting it.   The recipe also says to let the ganache set before serving.  If letting the ganache set for 22 seconds counts (the time it took me to lick off the spatula), then I nailed that step.

The cake is incredibly moist and so very chocolaty, like a mud cake  I could taste a little beet because I obviously knew it was there.  My daughter just read this post over my shoulder and cannot believe I fed her beet cake.  She had no idea.  I haven't told anyone else and I made her promise she couldn't either.  It might kill her. She has this nervous laugh when she is holding something back and I'm thinking that the secret will be out as soon as anyone attempts to take a slice.

**UPDATE**
This cake is so much better cooled the day after (I put it in the refrigerator because of the ganache). Absolutely no trace of beet.  Just one rich and chocolaty cake that is even good cold.
This might be my go-to chocolate cake! 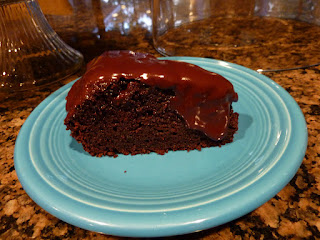 I love telling my peeps AFTER they eat something what they just ate.  I have been known to try some strange recipes and if they know beets are involved I know there will be no takers.   I really cannot afford to eat this entire cake by myself, although I can't help but think that it's a health food with all that beet (and all that sugar??)!  Maybe it will freeze well...I can ration it out over the next six weeks. 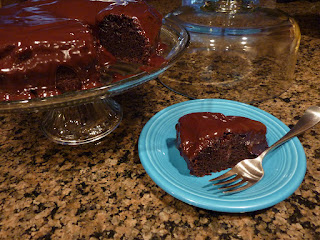 Go ahead and try this one!  You will be pleased!

And just to make you laugh....a picture of my youngest.
This completely captures her true essence. 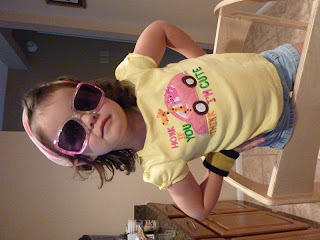 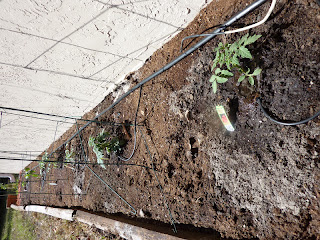 The one hobby that I have gotten rid of because of the the added work days this year is gardening.  I love to garden but there just isn't enough time in the day.  There was a huge sale on plants and soil so I finally gave in.  I spend a good deal of my weekend preparing the bed and then connecting a drip irrigation system that I purchased a few years ago but had never installed. 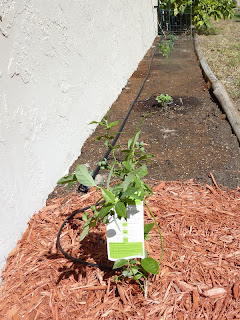 Here is my blueberry bush that the girls have named Blue Baby.  I also planted watermelon (worth a shot), orange peppers and several varieties of tomatoes.   I have three larger beds on the other side of the house but I know I won't have time for that much.  I'm keeping it simple. 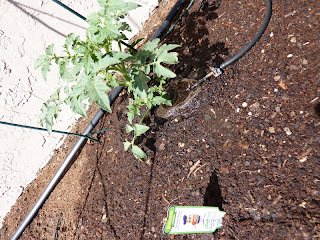 You can kind of see the irrigation system.  It works so well!  While I was at it I dug around, laid weed fabric, and mulched my three citrus trees.  They are finally producing fruit (because I finally fertilized and watered them).  Let's hope it doesn't get too hot too soon and fry all my plants!  I also hope that the squirrels stay away long enough for us to get some of the harvest.  They are my main garden pest.

Any garden aspirations this year?
Posted by Sarah at 6:40 PM No comments: Links to this post